Power to Gas facility pilot project – P2G Peruća aimed for hydrogen production facility is planned to be located within CCTG Peruća, in space dimensions of ca. 58 x 33 m. Transformation of electricity surplus produced from renewable energy sources (wind and solar power plants) into hydrogen will be conducted at this site.

When energy source is working independently from network or there is no market demand for electrical energy, installed renewable energy capacities (RES) near CCTG Peruća can storage  produced electric energy in the form of hydrogen. For this purpose, according to conceptual design, hydrogen production facility will be located within CCTG Peruća. 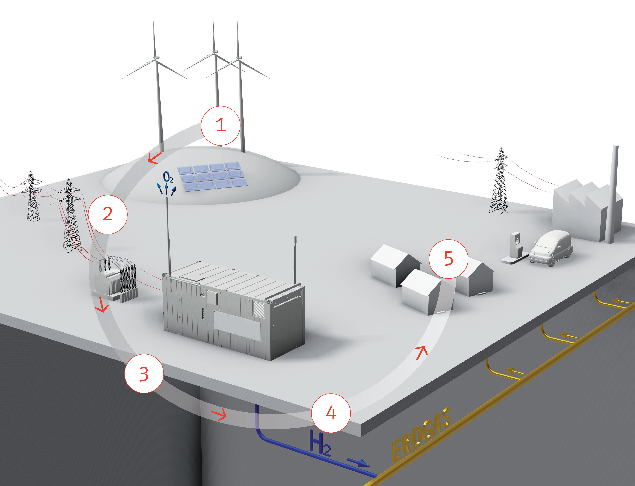 In the case of negative electricity prices in the electricity system, electricity from electrical system grid can be transformed into hydrogen (H2). There is a possibility for further hydrogen methanisation, in both cases, while the result is chemically identical to natural gas.

Study has recommended PEM P2G facility, with the total input power of 3.8 MW (6 MW in overload) / 675 Nm3/h of H2 based on Energiepark Meinz (Germany). This plant consists of three Siemens PEM electrolyzers, SILYZER 200 type and rated power 1.25 MW / 2.0 MW in overload (limited hours of operation) per unit and production of 225 Nm3/h of hydrogen per unit.

Analysis has shown that large amount of storage hydrogen with compressed hydrogen technology (CGH2) is not optimal since it requires a larger number of tanks. So, it is recommended to install only daily hydrogen storage installation for 1500 kg of hydrogen that would require 4 Linde hydrogen tanks, nominal volume of 95 m³, nominal pressure of 45 bars and a storage capacity of 350 kg.

Since there is no infrastructure to support and generate demand for hydrogen, it is recommended that produced hydrogen is locally utilized, by injecting into local natural gas distribution pipeline to increase the quality of gaseous fuel for CCGT Peruća. According to calculations, maximum natural gas savings at full load on mixed fuel gas amounts to 7.16 t/h of natural gas.

Natural gas generates savings when mixed fuel gas is used for assumed optimal and maximum operation mode for P2G facility with its hydrogen production capacity of 1500 kg/day, as shown in the following table:

Considering the fact that hydrogen market is still at the beginning of its development, as well as electrolysis technology and legislative framework for hydrogen production, distribution and consumption, return on the investment in P2G facility can be achieved only in the long term, so it requires state subsidiaries.

Designed Power to Gas facility P2G Peruća should not be viewed only as plant for storing electricity surplus generated from renewable energy sources, but as an opportunity for implementing modern technological solutions for improved integration of renewable energy sources and as continuation of low carbon footprint energy. With conceptual design of hydrogen production – P2G Peruća, Vis Viva project additionally positions itself within the Croatian Low Carbon Development Strategy.